for “Miracle”, the Barn Owl 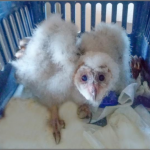 WR&R takes dozens of barn owls into care each year. Many are nestlings and fledglings and a few are injured adults. This spring, WR&R volunteer and raptor rehabber, Adam Gertsen, was on call on May 29 and had to drive to Lincoln where he picked up a little owl at a truss company. She weighed 165 grams (about the weight of a small apple). Not able to hold her head up, she appeared very weak and thin. Upon examination it was found that she had a fractured left wing at the wrist and her left leg and foot were turned in towards the inside of her body.

For the fractured wrist on the left wing, a tiny wing wrap was placed at the wrist for 8 days. WR&R rehabbers removed the wrap and used physical therapy to stretch the wing. The wrap was replaced for another 8 days. At the end of the second 8-day wrap the wing appeared to be normal. The owl could now fold her wing back into proper alignment as the wrist stayed in position. She was able to maneuver the wing for stretching and balance. 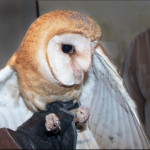 As for the twisted left leg, it is common to see this in small, young barn owls until they begin to develop as they age. But this owl’s leg problem seemed to be serious. It was obvious as the owl begin to grow and put on weight, her left leg was not developing properly. The left leg rolled in towards the center of the body thus turning the entire foot inward and to its side. The talons were curled and not useful. As she tried to walk, the left leg would stay under her body causing her to “walk” on the side of her foot, lose her balance and fall over. We decided to try physical therapy on the damaged leg and foot. So three times a day for three

weeks, I administered physical therapy for a total of 30 minutes each day. I wrapped her in a towel to keep the other leg immobilized and stretched and massaged her leg and talons. This was critical to gain the use of her use of her leg and foot with the hope that she could eventually be released back to the wild. 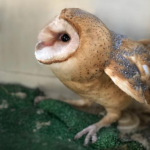 The physical therapy seemed to work. The owl began to use her left leg and foot in a much more normal way. She started walking well and began using her foot properly to walk and hold her food. I have no idea if it was the physical therapy or just Mother Nature and Father Time that made it possible for this owl to be releasable. But this is how she earned the name “Miracle”.

Miracle was released November 3, 2018, after receiving care for over 5 months. She was set free using a soft release at the home of Bruce Reinhardt (raptor rehab volunteer) in the hills above Lake Wildwood. Her weight was a healthy 503 grams or a little over a pound.

Bruce reported she took off into the night just like a healthy, proud barn owl should.

Your contribution to WR&R through Giving Tuesday will help future Barn Owls and other raptors by providing food, caging, and medication they need to be released back into the wild.

If you find an injured or orphaned wild animal between the hours of 9:00 AM and 3:00 PM, please call our Intake Center and make arrangements to get the animal to us.

Please watch our newsletter and press releases to see what we are doing and where.

If you find an injured or orphaned wild bird or mammal at ANY time of the year, contact us. Our answering service will direct you to an on-call volunteer.