Small Mammal Rehabber Western Gray Squirrels are common. They can be pests. But, they are so cute!

“Chainsaw” and his brother came to us early in July. Both victims of a chainsaw that went right through the middle of their nest before the tree cutters noticed it. The wife of one of the tree cutters brought the two very young squirrels into our Intake Center and I was called since I was the only one taking squirrels at that time.

One look at the sibling and I knew it could not make it. It’s injuries were too severe. However the other one had two holes in its pelt, one on his belly and one on his back. There was also a tear going from one hole to the other. I noticed that the muscle underneath seemed untouched. So I rushed it to Motherlode Veterinary Hospital. Dr. Molly Dinucci put a dozen stitches in its pelt. He was only about 4-5 weeks old.

He needed antibiotics for ten days and needed to have some cream rubbed on his stitches to keep them from drying so he wouldn’t scratch at them. They put a little stocking-knit over his body to keep the wound clean. That lasted until sometime on the way home. I found it in the transport box next to him. Tried it once more and it was off in minutes.

He had two medications that needed to be administered. One was for pain relief for about 3 days, twice a day and the other was the antibiotic for ten days plus a topical cream to keep the wound clean and not dry. He was young enough he had to be fed every three hours from about 4AM until 10PM each day. After a couple weeks he was fed every four hours, gradually eating more natural food like nuts, greens, and acorns working down to a bottle twice a day until he was around 12 weeks old. Gray Squirrels can not be released until they are about 14-16 weeks old when natural instincts kick in and they can forage for food and are weary of people, including me. 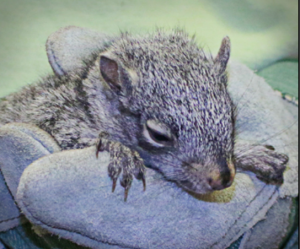 I took special care of him and he started to thrive. For some reason he never was able to be in a cage with any other squirrels. All the other squirrels were older than he was in the beginning and not welcoming of a new friend. As time went on, all the new squirrels that came in were too young to be in the same cage as he. Even with a dozen other squirrels, there was no one for him to get close to. The worst seemed to be coming true, he was starting to bond to me. Oh, no! That cannot happen! This was my first year with squirrels and I didn’t know what to do. I tried to not let him see me too much, I just gave him his food and left him alone.

Luckily squirrels do “wild up” just like other wildlife. I saw it coming and was so thankful. Chainsaw just before he was released back to the wild So now came release time. The night before his release, I captured him from his larger cage and put him in a transport cage. He was not happy! Not happy at all! But that was great, he was wild!

Since the trees at the bowling alley near downtown Grass Valley were cut down, I needed to pick a new area for him to live in. According to our release criteria we needed to release him within a 10 mile radius of where he was found. I considered both Empire Mine State Park and Condon Park. Something told me Condon Park would be best. 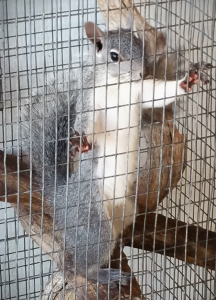 We drove in to the park the next morning. We walked a little ways down a side path and found some trees that I thought would be a good habitat for him. I opened his door and he literally flew out of the door and grabbed on to a bush. As he was hanging on to that bush I swear he looked at me with a smile. Then he jumped onto a tree nearby and ran to the top of it. He will be just fine.

Your Giving Tuesday donations will be used to assist small mammals like Chainsaw that need veterinary care or specialized medical treatment. WR&R thanks you as does Chainsaw!

If you find an injured or orphaned wild animal between the hours of 9:00 AM and 3:00 PM, please call our Intake Center and make arrangements to get the animal to us.

Please watch our newsletter and press releases to see what we are doing and where.

If you find an injured or orphaned wild bird or mammal at ANY time of the year, contact us. Our answering service will direct you to an on-call volunteer.