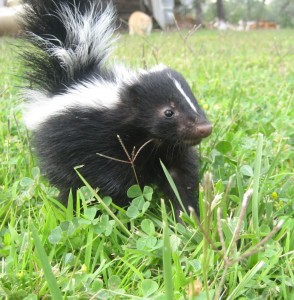 Skunks are members of the weasel family (Mustelidae). Skunks tend to den in shallow burrows or hollow logs. They are hardly ever found more than two miles from a water source. In urban territories, skunks den beneath buildings, decks, dumps, and woodpiles. They are capable of burrowing a den a foot or so underground, with well-hidden entrances. They like warm, dry, dark, and defensible areas; most house basements and crawl spaces qualify.

Skunks are generally nocturnal and begin foraging at sunset.  If a skunk does not find enough food during the night, it will foraged during daylight hours as well.  Skunks are omnivorous and help keep the rodent population in check. They often travel five to ten miles within their territory at night looking for field mice and other small rodents as well as lizards, frogs, birds, eggs, garbage, acorns, and fallen fruit. They also dig for insects, especially beetles, larvae, and earthworms. Their diet includes black widow spiders and scorpions. Being carrion eaters, they help keep roadways and neighborhoods clean. An estimated 70 percent of a skunk’s diet consists of insects considered harmful to humans. 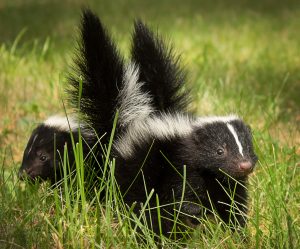 If you find abandoned baby skunks, you should phone a rehabilitator first. Often, the baby skunks are not truly abandoned by their mother. If you must move baby skunks, wear rubber gloves first. Baby skunks are easier to handle prior to adolescence, but will spray if they are scared. Skunks can carry rabies. Any skunk large enough to require two hands to pick up is old enough to be on its own.

The public should not handle an injured adult skunk. Contact your Animal Control or WRR immediately.

If you must move an injured adult skunk, use a towel or blanket and wear heavy leather gloves and glasses. Skunks spray when they are frightened; their eyesight is poor. It is important to move slowly. Speak to the skunk in a low voice so that it realizes you are approaching. Slowly and gently place in a box. Cover the box or carrier with an additional towel or blanket.