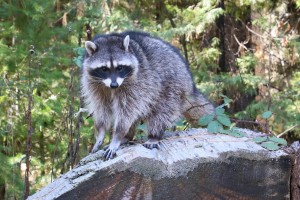 Raccoons are familiar animals with masked faces and ringed tails. They have five toes on both the front and hind feet. Their long, dexterous fingers enable them to open latches, untie knots, turn doorknobs, and open jars. Their prints look like tiny human baby handprints and footprints.

If the baby raccoon has been seen alone for more than a few hours, he’s probably been orphaned. Mother raccoons closely supervise their young and don’t let them out of their sight. If the baby raccoon is safe from dogs and other predators, you can put an upside-down laundry basket over the baby (with a weight on top) and monitor him for a few hours. The mother will not return if people or pets are nearby, so stay clear and keep pets away, giving the mother a chance to reclaim her baby. If the baby is cool or cold, it should be warmed before placing out for reclaiming. Place a hot water bottle under the towel the baby is resting on. Humans handling the baby will not make the mother reject it.

If the mother does not return in a few hours, contact Wildlife Rehabilitation & Release, 530-432-5522. Injured baby raccoons should be brought in immediately. 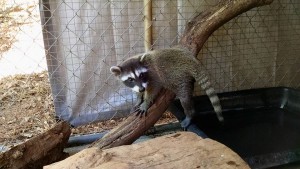 Do not touch an injured adult raccoon! Contact your Animal Control or WRR immediately! or 530-432-5522.

Most injured animals will fight even harder because they are scared. Mammals such as foxes, skunks, bats, coyotes and others are called vector species. They means they have the potential to carry rabies. If you have no other choice, here is what you need to handle an injured animal – if you are certain that the animal was injured versus being sick:

Throw a blanket over the animal to keep it calm. Wrap it up with the blanket while wearing gloves. Put it in the container and close it tightly. Call Wildlife Rehabilitation and Release 530-432-5522. A volunteer will take it immediately to a veterinarian. Do not try and care for this animal yourself, it needs immediate attention from a licensed veterinarian and wildlife rehabilitator.

To avoid problems with raccoons:

Do not feed pets outdoors. If you must feed outdoors, clear away food bowls immediately. Do not leave food out at night.