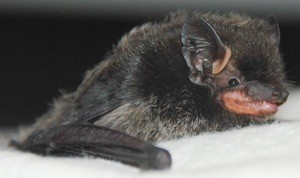 Never Handle a Bat With Your Bare Hands!

A bat is a wild animal. When it is picked up it will bite. Bats are small, so when they are on the ground, people tend to approach them. When they are sick or injured a bat often lies quietly and looks calm until they are touched, then they will try to protect themselves. Humans should never touch a bat without protecting themselves. We wouldn’t pick up an injured or sick raccoon or feral cats without protecting ourselves, but somehow people don’t stop and think about the dangers of being bitten by a bat. If the bat is touched with bare hands, the bat must be tested for rabies; this means the bat will need to be killed. If the bat escapes, the person should contact their health provider to evaluate the need for rabies vaccination. Many animals do not show symptoms of rabies until the disease has progressed. Signs and symptoms vary between species. Generally bats do not become ferocious when they display signs of rabies. They don’t foam at the mouth, or have other symptoms for which we are more familiar. Just because a bat is not acting vicious doesn’t mean it’s not sick. For more information see the CDC website.

IF THE BAT IS FLYING INSIDE THE HOME, open the doors or windows. Turn inside lights out and turn on outside lights. The bat will follow the bugs which are attracted to the light.

If this doesn’t work and you are sure no human contact has occurred: 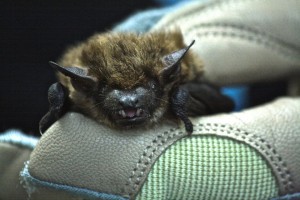 What is a Bat?