A bird of prey or raptor is a bird that hunts for food primarily using its talons. Their beak tip is curved and have superb vision.

If you find an injured adult or young raptor, unable to fly, call WR&R immediately – 530-432-5522. Do not attempt to care for these delicate birds. They have very specific food and care requirements. Not only is it dangerous for the bird, it is illegal.

The following describes some the of raptors found in the foothills of Northern California.

Owls come in many sizes and although most are nocturnal, some are diurnal and hunt during the day.  They fly soundlessly and have very acute senses of hearing and sight. They are found in all regions of the Earth except Antarctica, most of Greenland, and some remote islands. Though owls are typically solitary, the literary collective noun for a group of owls is a parliament.

Owls have large forward-facing eyes and ears, a hawk-like beak, and usually a conspicuous circle of feathers around each eye called a facial disc. Although owls have binocular vision, their large eyes are fixed in their sockets, as with other birds, and they must turn their entire head to change views.
Owls are far-sighted and are unable to clearly see anything within a few inches of their eyes. Their far vision, particularly in low light, is exceptionally good. They can turn their head 135 degrees in either direction and thus look behind their own shoulders. It is not correct, however, that they can turn the head to face completely backwards.

The Western Screech Owl is a small owl of the West and can be found in urban as well as wild lands. It is only 7-10 inches in size but has been known to capture prey larger than itself, including rabbits and ducks. Western Screech Owls are vulnerable to habitat loss because of urban development.

Barn Owls are the most widespread of all owl species and are found on every continent except Antarctica. The barn owl’s face is arresting. There are no ear tufts. The eyes and beak are completely encircled by a heart-shaped facial ruff of white feathers that radiate out from the small, dark eyes. Barn Owls are more nocturnal than other owls. They wait until dark before venturing out to hunt, except when the demands of their young may start them hunting at twilight. Normally, before daylight, they retire to some shadowed or enclosed area in an old building, a hollow tree or a hole in a rocky cliff and remain there drowsily inactive all day.

When hunting at night, the Barn Owl sweeps the fields on silent wings catching its prey with its long, slender claws. It prefers small mammals but occasionally in winter, when mice and gophers are scarce, it will take small birds. The prey is torn apart and swallowed — bones, skull and all. The indigestible parts are formed into pellets and disgorged at the roosting area or about the nest. 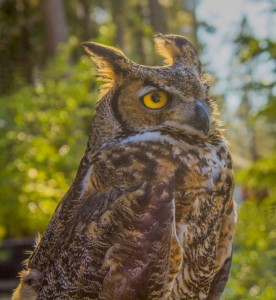 The Great Horned Owl is a very large owl native to North and South America. It is an adaptable bird with a vast range, though not as widespread as the Barn Owl. They have excellent hearing and exceptional vision in low light. Their hearing has better depth perception than human hearing and better perception of sound elevation (up-down direction). The latter is possible because owl ears are not placed in the same position on either side of their head: the right ear is typically set higher in the skull and at a slightly different angle. By tilting or turning its head until the sound is the same in each ear, an owl can pinpoint both the horizontal and vertical direction of a sound. The eyes of Great Horned Owls are also nearly as large as those of humans and are immobile within their sockets. Instead of turning their eyes, they turn their heads.

Their call is a low-pitched but loud “ho-ho-hoo hoo hoo.” Sometimes it is only four syllables instead of five. The female’s call is higher and rises in pitch at the end of the call. Young owls make hissing or screeching sounds that are often confused with the calls of Barn Owls.

Hawks are medium-sized birds of prey. They are mainly woodland birds that hunt by sudden flights from a concealed perch. They usually have long tails. Hawks are widely reputed to have visual acuity several times that of a normal human being. This is due to the many photoreceptors in the retina (up to 1,000,000 per square mm for Buteo, against 200,000 for humans), an exceptional number of nerves connecting these receptors to the brain, and an indented fovea, which magnifies the central portion of the visual field.

The Red-tailed Hawk is a medium-sized bird of prey. Its preferred habitat is mixed forest and field, with high bluffs or trees that may be used as perch sites. However, it has adapted to the presence of man and can often be seen perching on highway utility poles. It can also be found in cities. The non-fiction book Red-Tails in Love: A Wildlife Drama in Central Park by Marie Winn made Pale Male, a Red-tailed Hawk in New York, the most famous urban red-tailed hawk. (Photo by Gary Yankech)

A common forest-dwelling hawk of the East and California, the Red-shouldered Hawk favors woodlands near water. It is perhaps the most vocal American hawk. It gets its name from the rusty red coloring on the upper part of its wing. In flight, rusty wing coverts contrast with black-and-white striped flight feathers.

Although the American Crow often mobs the Red-shouldered Hawk, sometimes the relationship is not so one-sided. They may chase each other and try to steal food from each other. They may also both attack a Great Horned Owl and join forces to chase the owl out of the hawk’s territory.

Falcons are different from hawks and can be identified by their longer, more streamlined wings.  They are powerful hunters and fast fliers. These birds use their notched beak to kill their prey unlike other birds of prey that use their feet.  They have exceptional vision.  The female falcons are larger than the male.

Peregrine Falcons are sleek, crow-sized birds of prey famous for their speed and beauty. They have a wingspan of 39-43 inches. Peregrine Falcons haveone of the longest migrations of any North American bird. Tundra-nesting falcons winter in South America, and may move 15,500 miles in a year.
A peregrine hunts from the wing or from a high perch. It spots prey with keen eyes and begins its stoop, a streamlined dive with tail and wings folded and feet lying back. The falcon hits its prey with its foot, stunning or killing it, then swoops back around to catch it in mid-air. If the prey is too heavy to carry, the peregrine will let it fall to the ground and eat it there. Peregrines pluck their prey before eating it.

During a stoop, peregrines may reach speeds of 200 mph. The air pressure from this bullet-like plunge might burst an ordinary birds lungs. It’s thought that the series of baffles in a peregrines nostrils slow the wind velocity, enabling the bird to breathe while diving. This magnificent bird almost became extinct because the devastating effects of the pesticide DDT which caused eggshell thinning and breakage. In 1970, wildlife biologists knew of only two pairs of peregrine falcons nesting in California. Now, there are approximately 150 nesting pairs and an estimated total population in the state of about 750 birds, according to Brian Walton, coordinator of the Santa Cruz Predatory Bird Research Group (SCPBRG) at UC Santa Cruz.

Thanks to the elimination of most uses of DDT and population recovery through captive breeding, the species has recovered and has been removed from the federal endangered species list.

The American Kestrel is the smallest falcon in North America—about the size of an American Robin. It is the only one of the falcons that hovers over its intended prey.